Shimla is the district and capital and largest city of Himachal Pradesh. Shimla is also called the Queen of Hills. The old name of Shimla was Shyamala, which was named after Shyamala Mata, an incarnation of Goddess Kali. Shimla is home to large buildings, including the Tudor Baths, Neo-Gothic architecture, and several temples and churches. Shimla’s Jhakhu Temple and Kalka-Shimla Railway Line, Shimla Mountain Biking Race are major tourist attractions. The Shimla Mountain Biking Race started in 2005 and Shimla also has the largest natural ice skating rink in South Asia.

We have told the history of Shimla on this website, so if you want to read the history of Shimla then click on History of Shimla Himachal Pradesh. The bridge connecting Shimla to Chhota Shimla, originally built by Lord Combermere in 1829, Shimla in the 1850s saw its first political meeting in Shimla in 1832: between Governor-General Lord William Bentinck and Maharaja Ranjit Singh. In 1905 the 500-foot Market Tunnel (Khachar Tunnel) or Elysium Tunnel (now known as the Auckland Tunnel), about 120 feet long, was built.

The Kalka-Shimla railway line opened in 1903, and Shimla’s reach and popularity increased significantly. It was praised as an engineering feat with over 806 bridges and 103 tunnels and became known as the “British Jewel of the Orient”. In 2008, it became part of the UNESCO World Heritage Site. On 18 December 1970, the Himachal Pradesh State Act was passed by the Parliament and the new state came into existence on 25 January 1971. Thus Himachal emerged as the eighteenth state of India. Pre-independence structures are still visible in Shimla; Buildings like the former Viceregal Lodge, Assembly Chamber, Auckland House, Christ Church, Gorton Castle, Shimla Town Hall, and the Gaiety Theater are reminders of British rule in India.

Shimla is prone to earthquakes due to poor construction techniques and increasing population, which is a serious threat to the area. The city had a lot of pine, and deodar trees but due to the increasing number of tourists, people have lost their land to build more infrastructure for themselves. Frequent landslides are a matter of great concern for the city.

Shimla is said to have been built on top of seven hills, including Invaram Hill, Observatory Hill, Prospect Hill, Summer Hill, Bantony Hill, Elysium Hill, and Jakhu Hill. In recent times the city has spread among the original seven hills.

Shimla’s Lakkar Bazar is very famous and Tatta Pani, 55 km from the main city, is believed to have medicinal value. Shimla also has the only natural ice skating rink. The city has sports venues such as the Indira Gandhi State Sports Complex, the main sports complex, a golf course at Annandale, and another nine-hole golf course at Naldehra, away from the city, which is one of the oldest in India. 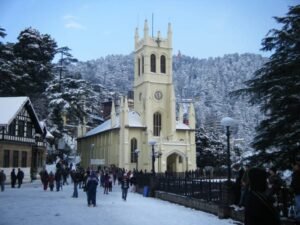 The hotel industry is one of the major sources of income generation for the city. The main sources of employment in Shimla are tourism and horticulture products. Shimla has up to 6500 hotels including 5-star hotels. A Model Career Center has been set up in Shimla for job seekers. Shimla is the health center of the region with major hospitals being Indira Gandhi Hospital (IGMC), Deen Dayal Upadhyaya Hospital (RIPON), Kamla Nehru Hospital, and Sindhu Hospital. Major departmental headquarters of the state are also located in Shimla such as Himachal Pradesh Government Printing and Stationery Press, Himachal Pradesh State Electricity Board, and Himachal Pradesh Police Headquarters. Shimla has five police stations and three fire stations. There are eleven courts in the district, including one fast-track court. There are many new startups in and around Shimla. There are more than six call centers in Shimla.

Shimla weather
The climate of Shimla is predominantly cold during winter and moderately hot during summer. The temperature in winter usually ranges from -4 °C to 10 °C. and during summer is between 19 and 28 °C. The average total annual rainfall is 1,575 monocots, and Shimla receives snowfall in January or early February every year. Sometimes it happens even in December.

Shimla Culture
Various festivals are celebrated in Shimla. In which the summer festival lasts for 3-4 days. The spoken languages in Shimla are Hindi, English, and Pahari. After the partition of India in 1947, Punjabi people settled in the city using the Punjabi language. Most of the people in Shimla city are of Hindu religion. Many folk dances are performed in Shimla, here Nati, Banyangchu, Chhohara, Rasa, Lung-dar-ma Shand, and Shabu dances are prominent.

Shimla is full of pine and deodar trees. Wood is used extensively in all the major buildings of Shimla. A variety of Shimla crafts made of wood are small boxes, utensils, image carvings, and souvenirs. Carpet making in Shimla is a major attraction for tourists. The wool is used for making handkerchiefs, hand fans, gloves, and caps, in the embroidery of blankets and rugs. These include exquisite jewelry, embroidered shawls, and items ranging from textiles to leather.

How to Reach Shimla?
By Air: Jubbarhatti is the airport in Shimla from where regular domestic flights are available from major cities of India.
By Rail: Kalka is the nearest railway station connecting Shimla to various neighboring states.
By Road: Chandigarh and New Delhi are connected by national highways which makes Shimla the most attractive destination for road trippers to start this awesome journey. 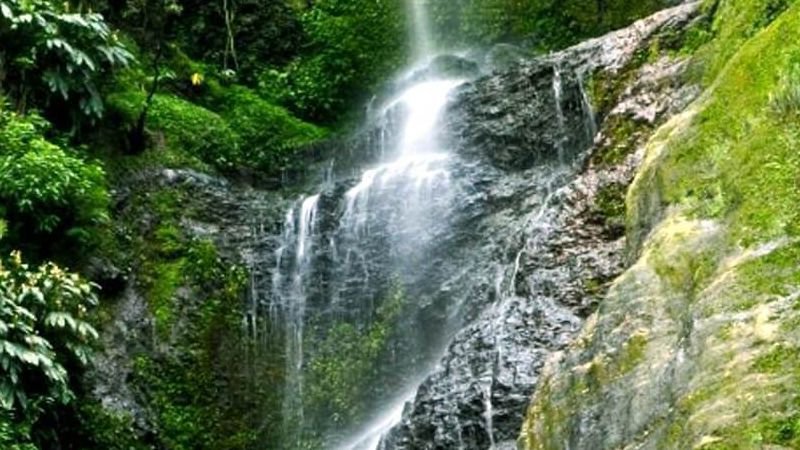 The beautiful Chadwick falls lies only a few kilometers away from Summer Hill in Shimla. Th...

The Shimla State Museum has a good collection of ancient historical sculptures, paintin... 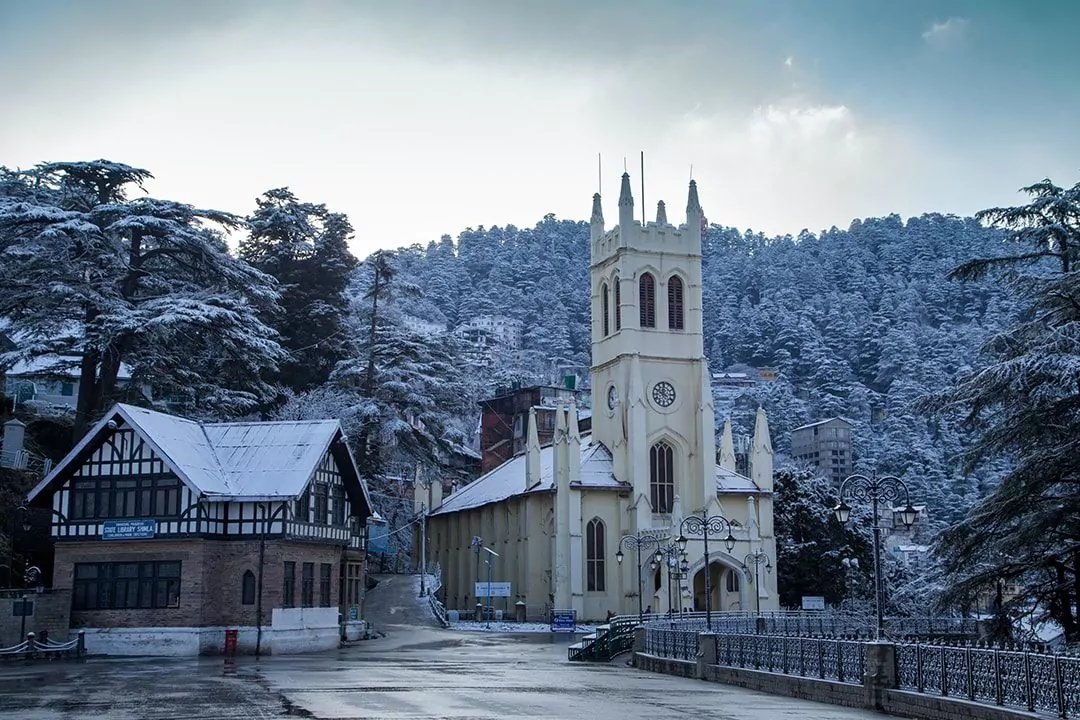 Jakhoo Temple is an ancient temple in Shimla, dedicated to Hindu deity, Hanuman. It is situated on Jakhoo Hill, 2.5 km /1.3 miles east from the Ridge, Shimla at a... 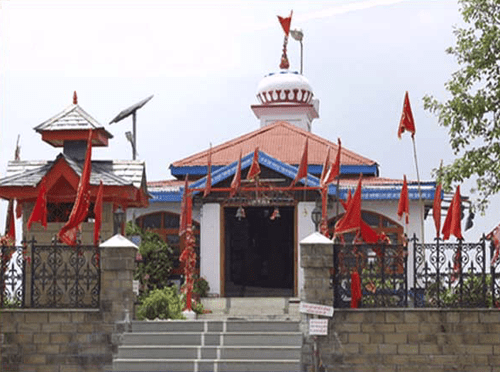 The Tara Devi Temple is a holy place, located 11 km away from the Shimla Bus Stand. It is positioned am...

On 9th September 1844, the foundation stone of Christ Church. For the Divine Services, the church build... 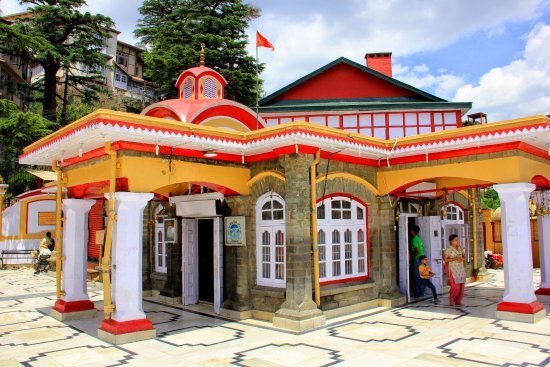 The Kali Bari Temple, one of the ancient temples of the city, was built in 1845. Dedicated to the fearsome reincarnation of Goddess Kali, known as Shyamala, the Goddess is believed to have existed nea... 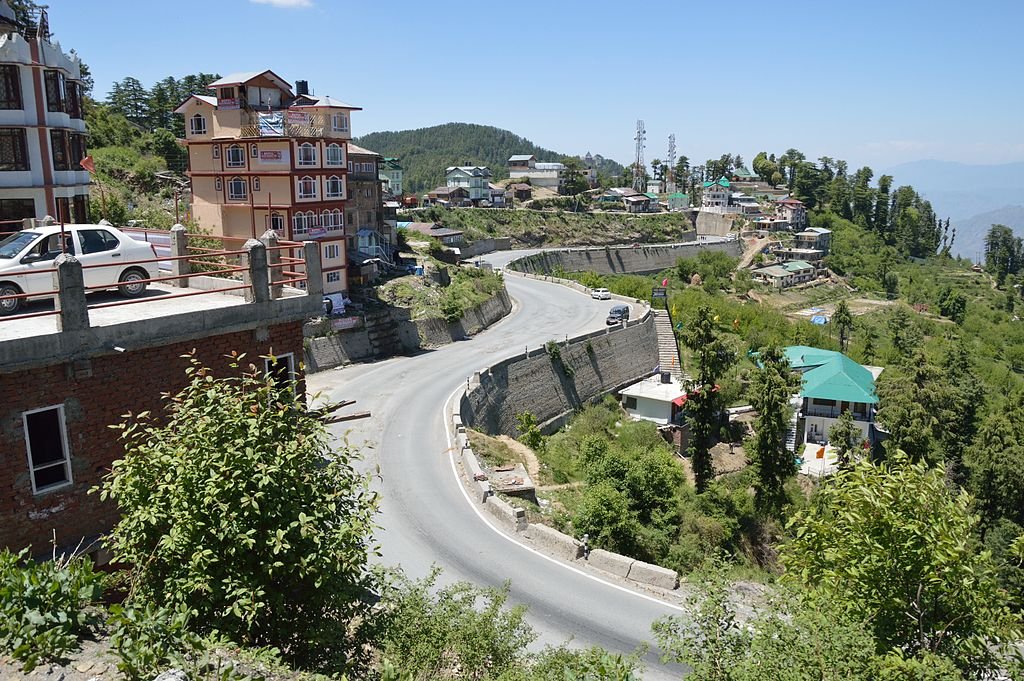 Kufri is a small hill station in Shimla district of Himachal Pradesh state in India. It is located 20 k...

A quiet escape and one of the less crowded attractions of the state, Theog in Himachal Pradesh, warmly wrapped in the arms of the mighty Himalayas, has everything a popu... 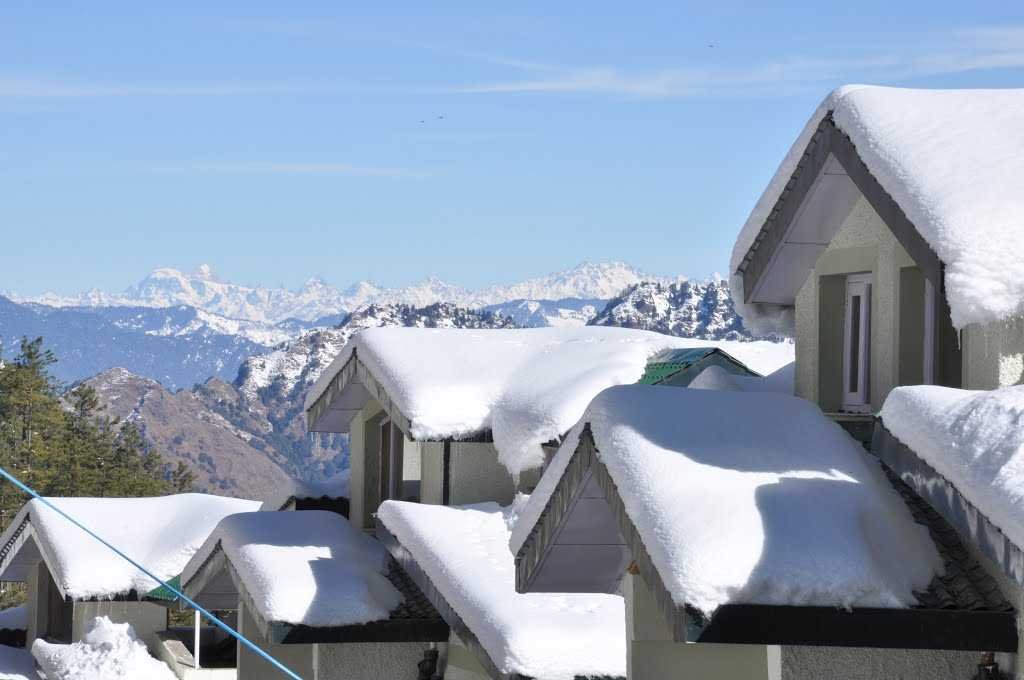 Mashobra is a town in the Shimla district of Himachal Pradesh. It is connected to the state capital Shimla (earlier Simla) through the historic Hindustan–Tibet Road built-in 1850 by Lord Dalhousie. ... 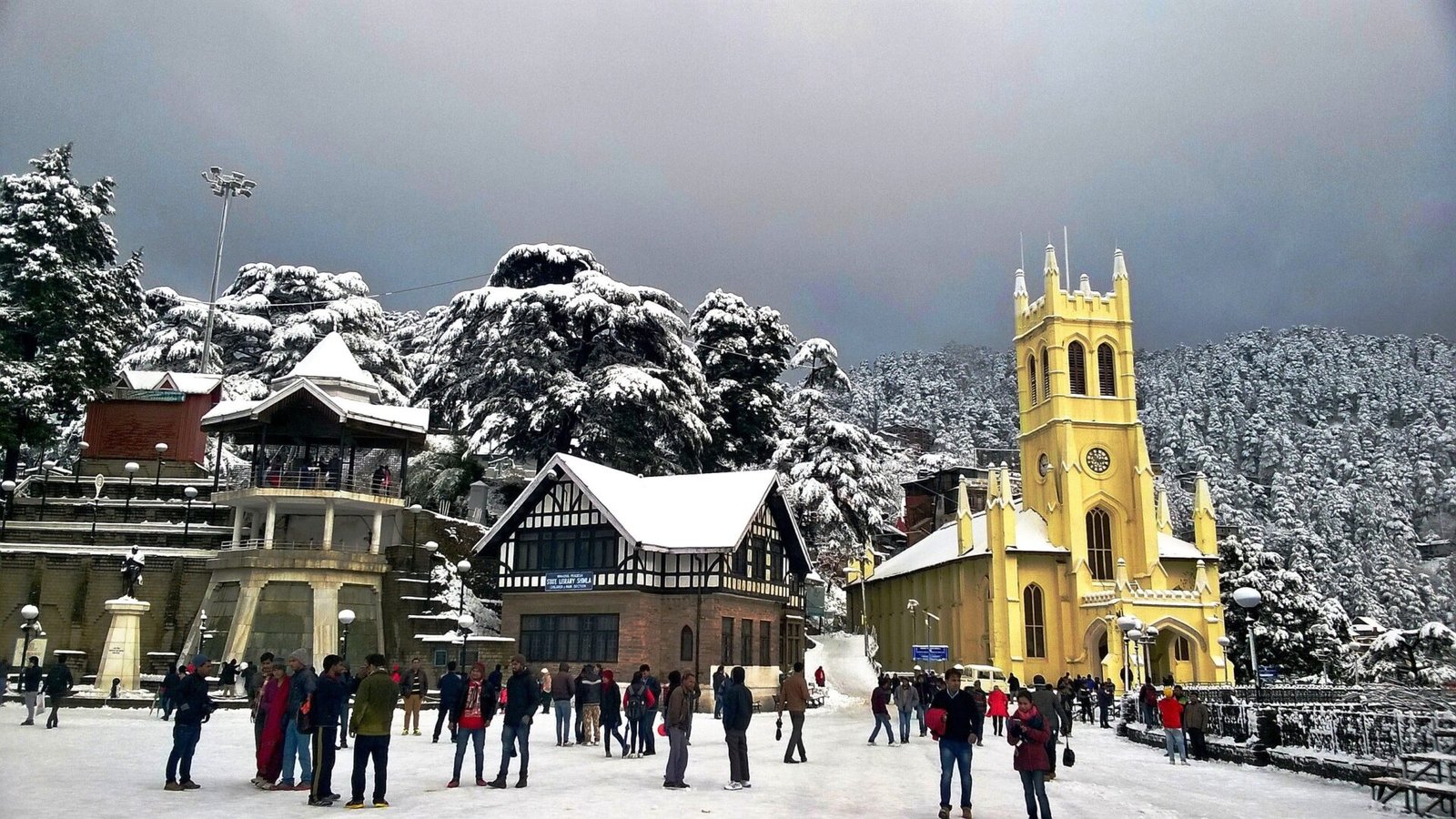 The Ridge road is a large open space, located in the heart of Shimla, the capital city of Himachal... 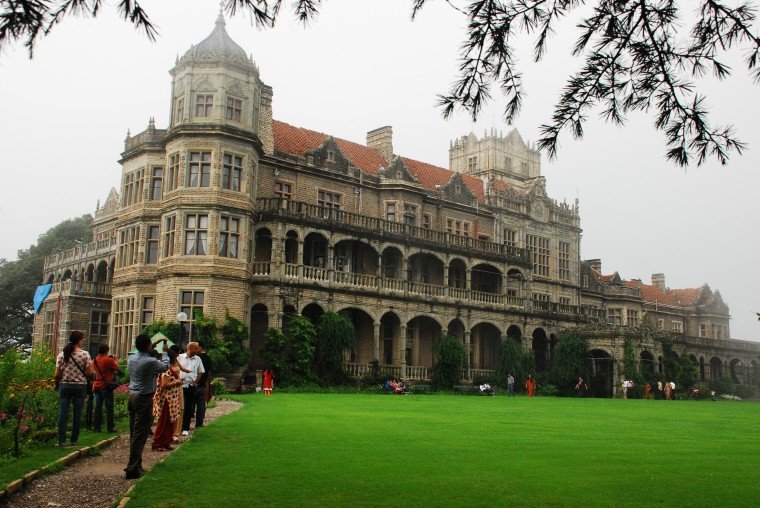 This magnificent building was built in 1888 as the residence of the British Viceroy Lord Dufferin... 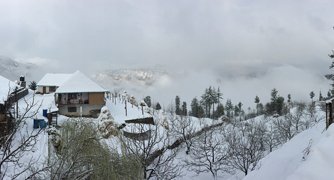 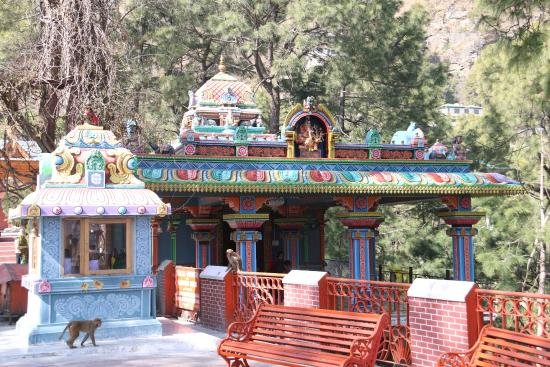 Sankat Mochan temple is one of the most popular tourist attractions in Shimla, which is located amid the lush green and tranquil locals of Himachal Pradesh. Tourists visit this temple to pay obeisance...