The following are the list of rivers in Himachal Pradesh:-

3. Ravi:- According to Rig Veda, the Vedic name of Ravi is ‘Parushini’ and Sanskrit’s name is ‘Irawati’.Ravi river is originated from the Kangra district. The length of the Ravi river is 158km before entering Punjab state

4. Beas:– The Vedic name Beas river is: ‘Aarijik‘ and the Sanskrit name is: ‘Bipasha‘. The Beas river is originated from Beaskund in the Pir Panjal range near the Rohtang Pass. It covers a distance up to 260 km in Himachal Pradesh before entering Punjab state.

5. Yamuna:– It is originated from Utter Kashi of Uttrakhand and it is the second-largest tributary river of the Ganga and the longest tributary in India. Vedic name of Yamuna is: ‘Kalindi’ According to the ‘Purans’, Yamuna is the daughter of Surya deva and the sister of Yama – the god of death so the Yamuna is also worshiped like Ganga. It is merging with Ganga at Triveni Sangam, Allahabad where Indians celebrate the Kumbh Mela after every 12 years. The Yamuna is the smallest river among all five rivers. 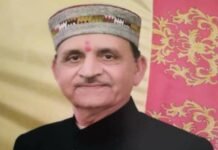