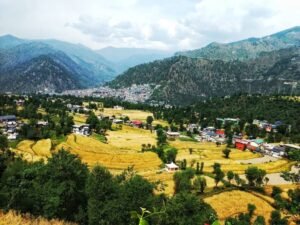 Chamba an ancient town of Himachal Pradesh is the headquarters of the district Chamba Himachal Pradesh which was also the capital of the erstwhile state of Chamba. Located at an altitude of 996 meters above the mean sea level the town is situated on the banks of the Ravi River at its confluence with the Sal River.

As the historical records date the history of the Chamba region to the Kolian tribes in the 2nd century B.C. but the state of Chamba Himachal Pradesh was formally founded about the middle of the 6th centuryA.D. by Meru Varman. The Brahmaputra which is considered ed to be the present Brahmaur village was founded by him and made the capital of the State. In 920 A.D. Raja Sahil Varman shifted the capital of his kingdom from Brahmaur to this place at the request of his daughter Champavati and named Chamba after his daughter.

In this blog, you can find more information about Chamba in Himachal. Another legend is that Chamba town might have derived its name from the Champa trees which are found in and around the town. Chamba town has numerous heritage monuments like the 10th-century Champavati temple, Sita Ram Temple, Bansi Gopal Temple, Kharura Mohalla, and Hari Rai Temple, the 11th-century Sui Mata Temple, and Chamunda Devi Temple. Built during the 10th century the Lakshmi Narayan group of temples complex are the famous heritage and religious site of the town. Built by Raja Umed Singh between 1747-65 Akhand Chandi Palace overlooking the Chaugan, which has since been converted to a government college, adds to a panoramic view of the town. Bhuri Singh Museum built-in 1908 is the main attraction to archaeological lovers visiting Chamba town.

If you’re trying to find a quiet getaway, attempt Bharmour, 64km from Chamba city. Lying between the Pir Panjal and also the Dhauladhar ranges, it offers pleasant mountain views. If you’re trying to find some activity, visit the temples that mirror native designs. The Chaurasi temple sq. encloses eighty-four shrines designed between the seventh -10th centuries. The temple of the Bharani Hindu deity stands on a steep wooded slope, concerning 4km from the city. you’ll be able to reside in HPTDC’s edifice Gaurikund, known as tourer Places in Chamba. If you happen to be within the space in August/September and are not antipathetic to some exhausting trekking, you’ll be able to be a part of the native folks as they undertake the Manimahesh Yatra, which ends in a very holy dip in a very glacial lake below the Manimahesh Kailash Peak, concerning 34km from the city. The competition is controlled by Krishna Janmashtami to Radhastami.

Languages Spoken: English and Hindi are spoken by people engaged in tourism and professional trades. The locals mainly use Chambyali, a dialect.

Clothing Essentials: Summer temperatures in Chamba can rise to around 35 degrees Celsius and in winter they do hover near Zero degrees Celsius. Light cotton clothes are best suited for summers, light woolens for spring and autumn but for winters, heavy woolen clothing is necessary. Those traveling into higher lands would require heavy woolens as the morning-evening temperature can get very cold.

Rivers: The town, the district, and the valley where the town is located share the name of Chamba. The town of Chamba is located at the junction of the Ravi River and its tributary, the Sal River, with the Shah Madar hill forming the backdrop on its eastern side The Ravi flows in an east-west direction forming deep canyons.

Fairs & Festivals
Chamba is known for its festivals. The Sui Mata festival is held for four days in March/April every year in memory of princess Sui, who gave her life to protect the people of Chamba. Women in Chamba revere her and her image is carried from the Old Palace (Rangmahal) to her small shrine accompanied by singing and dancing.

The Minjar festival is celebrated in late July/early August every year. The origin of this festival goes back to the 10th century AD. This festival marks the harvesting of the annual maize crop. It culminates with a procession to River Ravi and the throwing of the silk tassels or Minjares (representing sheaves of maize), worn by men and women into the river.

How to Reach
BY AIR – The nearest airport from Chamba in Himachal Pradesh is the Gaggal airport in Dharmshala, which is located at a distance of 124 km. this airport is well-connected with all the important cities such as Delhi, Chandigarh, and Kullu. Once at the airport, you can hire a taxi to reach your destination.
BY RAIL – The nearest railway station to Chamba is the Pathankot railway station. It is located at a distance of 103 km. from outside the railway station, cab services and buses are available to reach Chamba. Trains to and from Delhi, Amritsar, Jammu, Hatia, Udhampur, Mumbai, Bhatinda, and Kolkata ply between the two stations.
BY ROAD – Chamba in Himachal Pradesh is well-connected by road to most of the neighboring towns of the state and cities of the country. You can opt for a private cab. To reach Chamba, state-run and private buses are also available from Dharamshala, Khajjiar, Charmour, Pathankot, and Dalhousie. 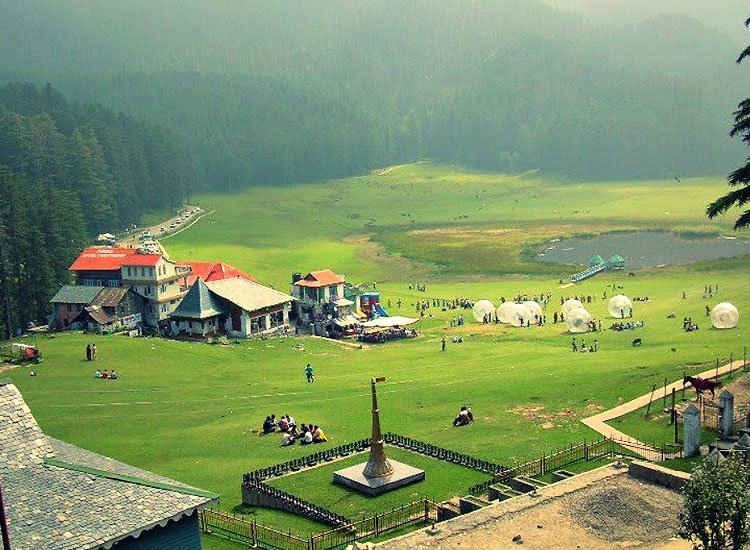 In the shadow of the snow-covered Himalayas, Khajjiar Lake is the most spectacular of lakes. Surrounded by ... 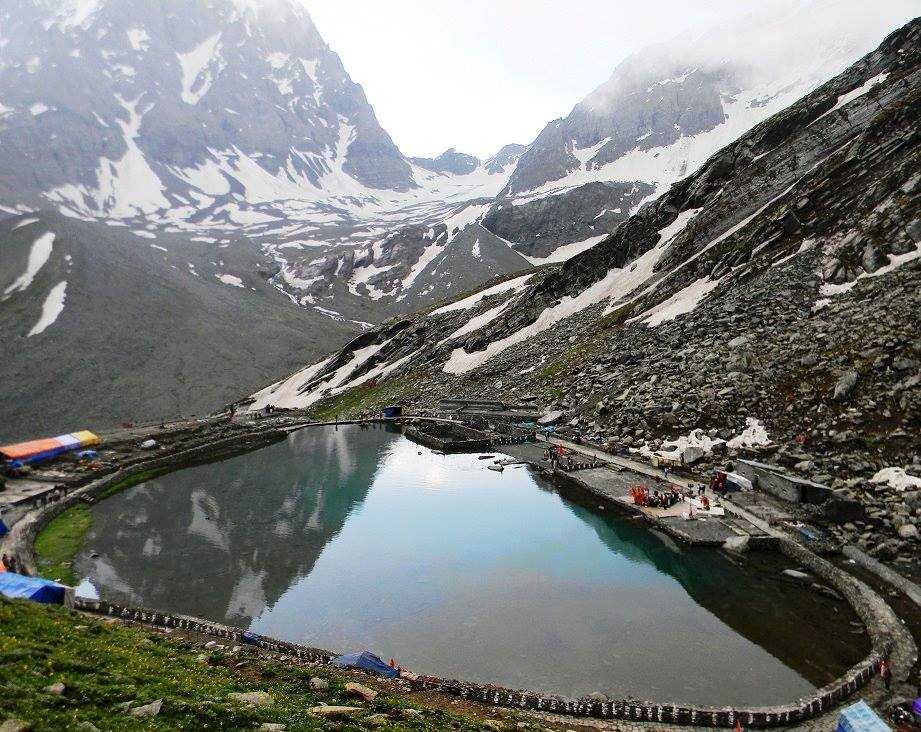 Manimahesh lake (also known as Dal Lake) is situated in the Pir Panjal Range of the Himalayas, in the 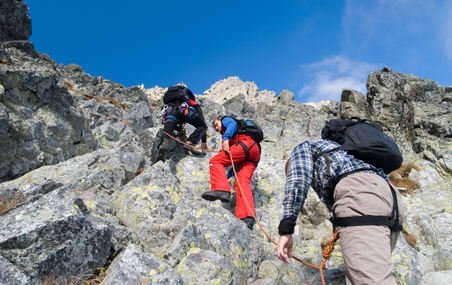 This adventure activity is popular and carried out at various places in Dalhousie, especially in Khajjiar. Since the activity is done under pr... 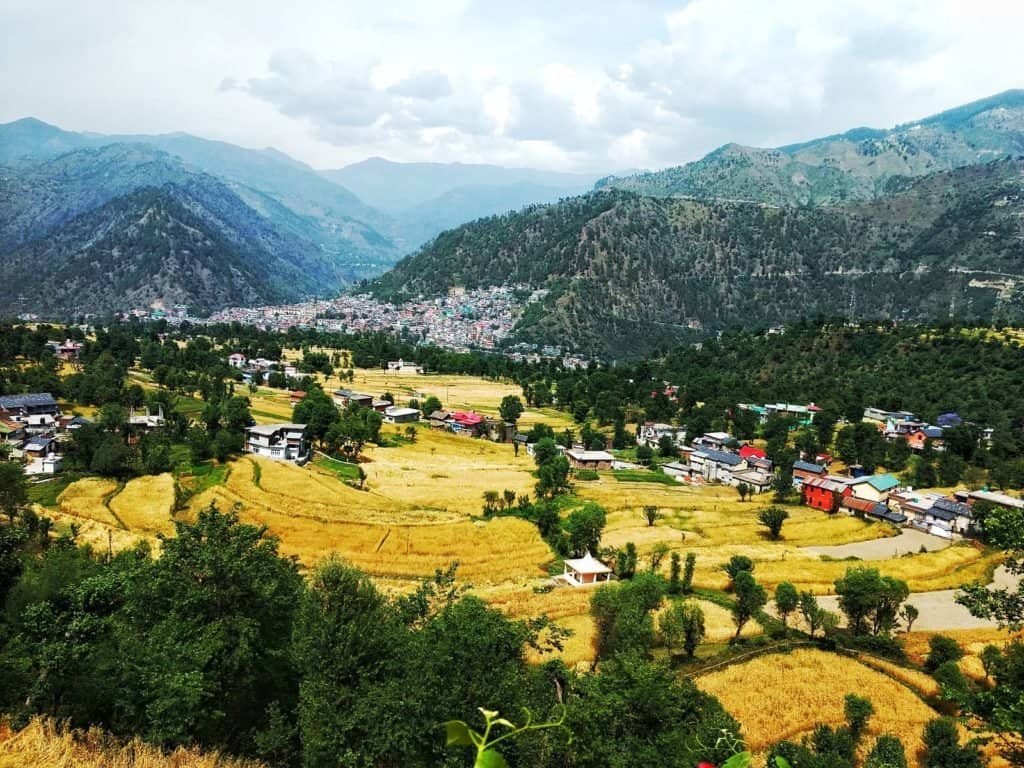 Away from the chaos of city life, lies a small town of Dalhousie. The attractive hill station is located in the Chamb... 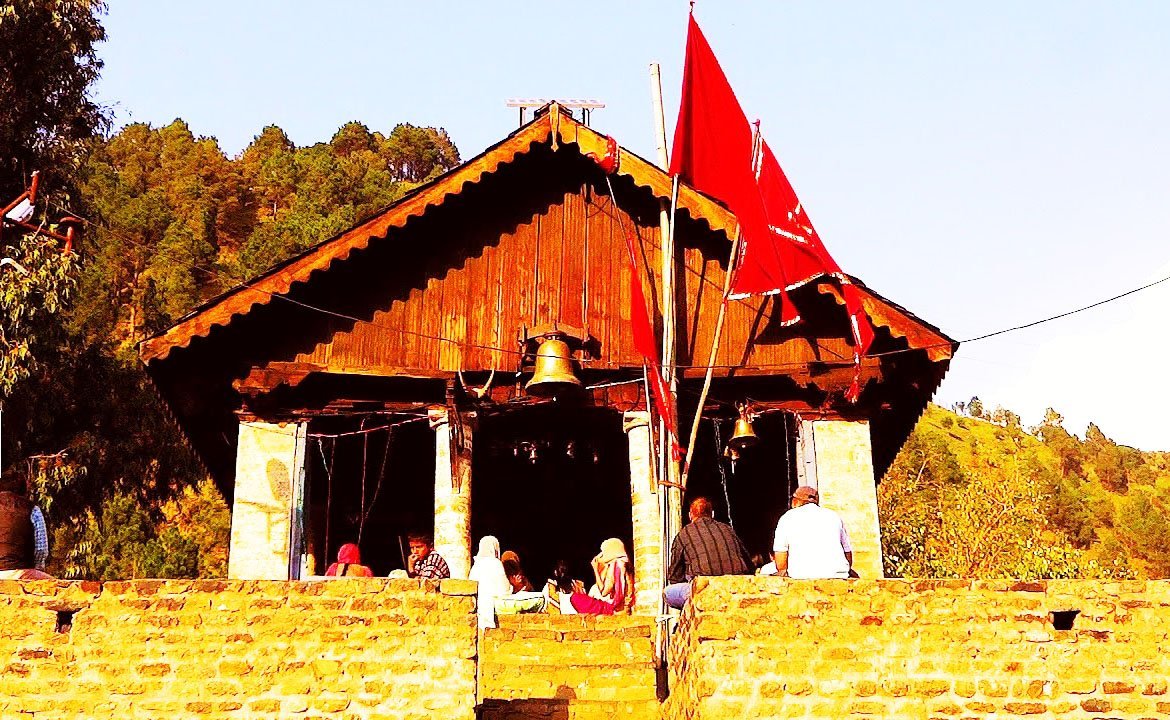 Perched on top of the Shah Madar Range and overlooking a spectacular view of the tiny township of Chamba, Chamunda Devi Temple... 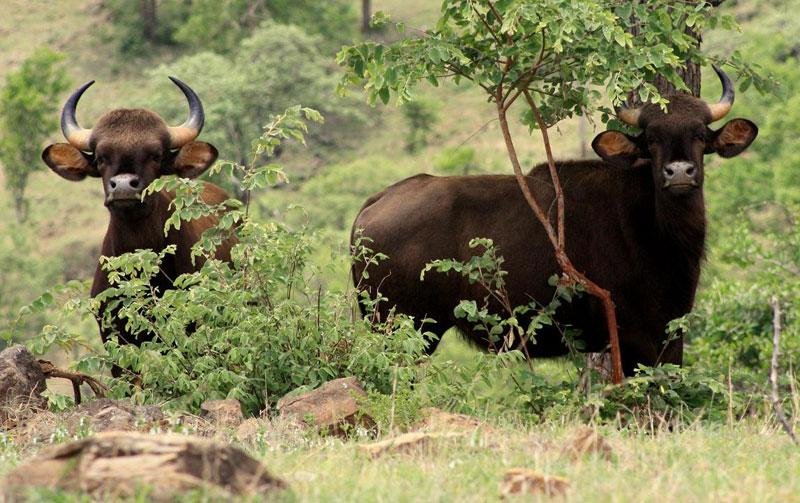 Thick deodar foliage, a plethora of wildlife, snowcapped mountains, carpets of verdantgrasslands and easy on the eye streams of fresh water... 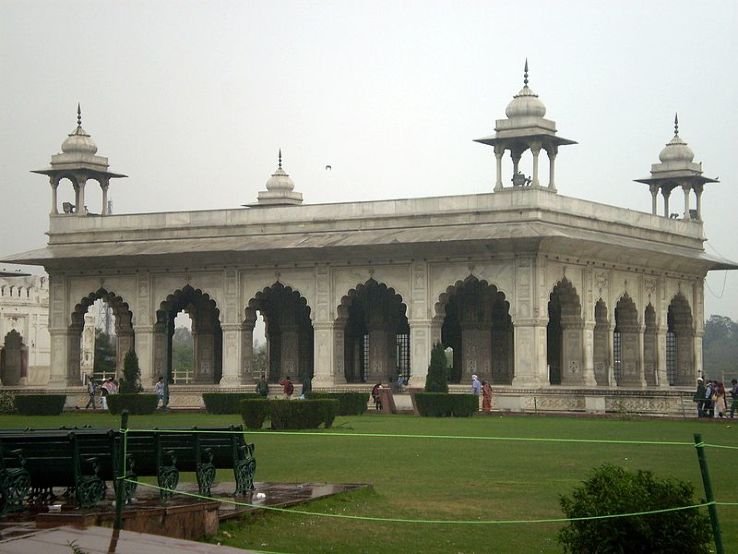 Founded by Raja Umed Singh in the 18th century, the Rang Mahal showcases a perfect blend of British and Mughal architecture. It's one of the largest monuments, which is located in Chamba. It's a strik... 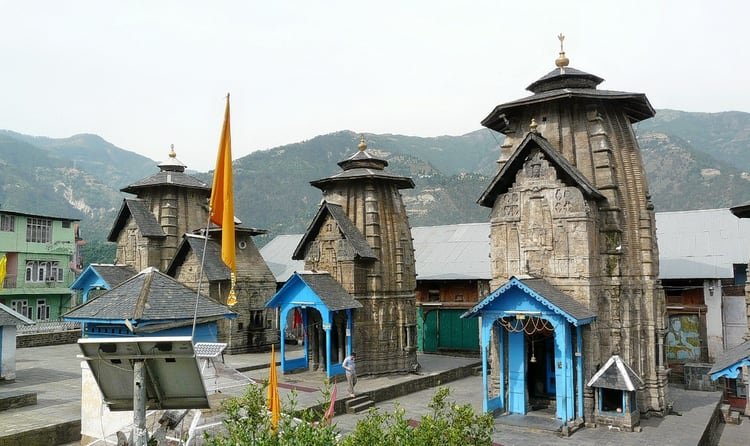 Laxmi Narayan Temple is one of the oldest and largest temples of Chamba, which was built by Raja Sahil Varma around the 11th century. There are in total about six temples on the premises of Lakshmi Na... 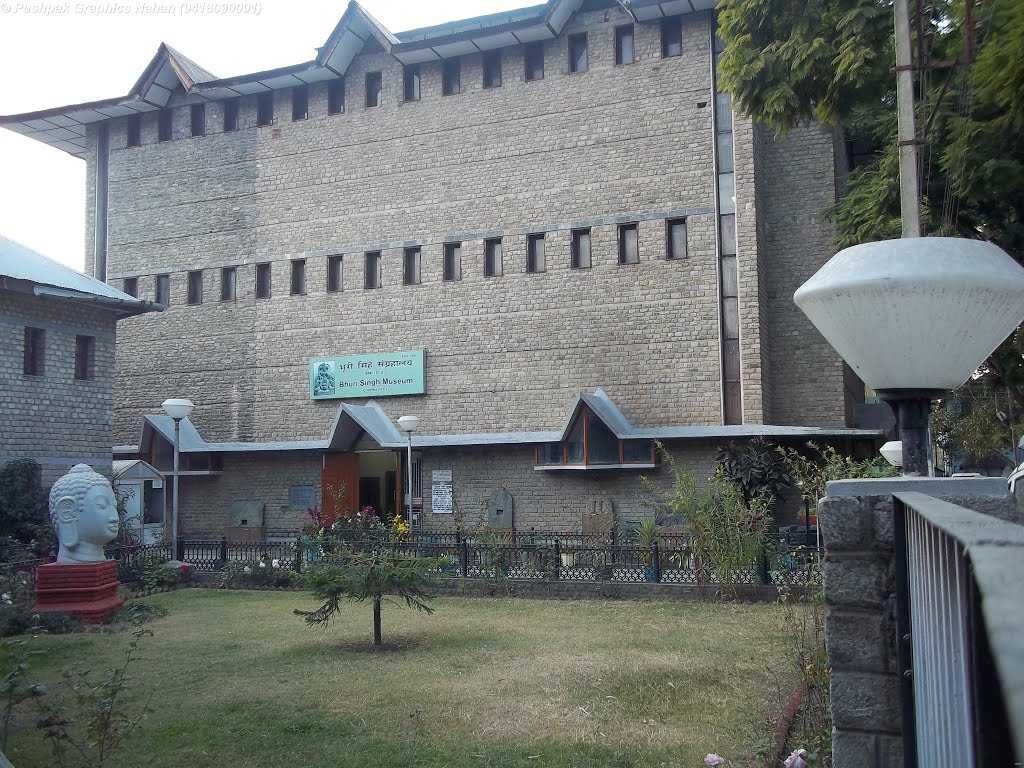 Founded in the year 1908 to honor Raja Bhuri Singh, Bhuri Singh Museum is located in close proximity to Chaugan town of 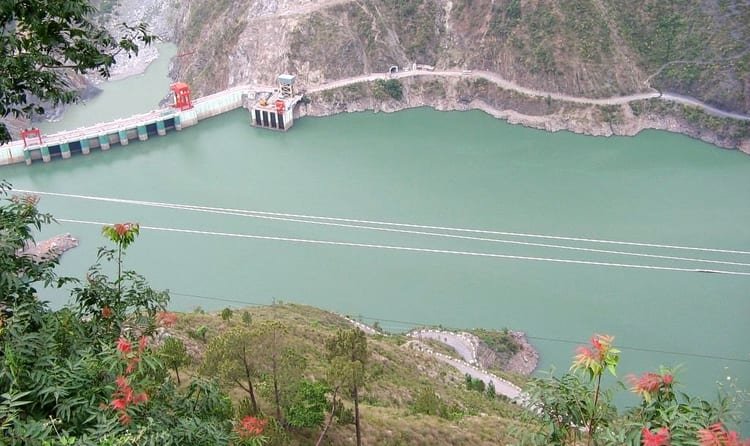 Built upon the River Ravi, the Chamera dam is situated in the Chamba district, making it one of the most i...