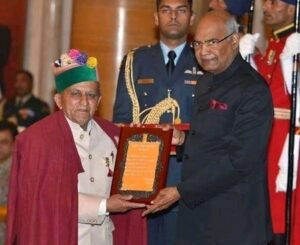 Padma Shri 2022 Vidyanand Sarek is a Pahari litterateur and folk artist. In 2022, he has been awarded the Padma Shri by the Government of India for his contribution to literature and folk. Vidyanand Sarek was born on 26 June 1941. He hails from Rajgarh in the Sirmaur district of Himachal Pradesh. Sarek started his career in 1957 when he was in class VIII and participated in a folk dance competition organized by All India Radio in Delhi. He has translated 51 poems of Rabindranath Tagore as part of a central government project. He has also translated 18 chapters of the Gita into the Sirmauri language. 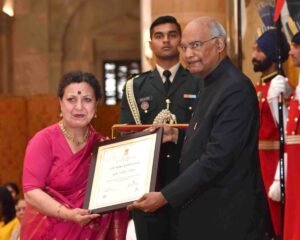 Lalita Vakil is an Indian embroidery artist known for her contribution to the preservation and promotion of Chamba Rumal, a traditional form of handkerchief embroidery, from the Chamba district of Himachal Pradesh. Lalita Vakil was married at the age of fifteen. It was her father-in-law who recognized her talent in creating designs for Chamba Rumal. He motivated her further to train local girls and women in this craft. Lalita Vakil received the Padma Shri award from President Ram Nath Kovind. Lalita Vakil has been awarded Padma Shri in 2022 by the Government of India for her contribution to the field of arts. She was also honored with the Nari Shakti Puraskar in 2018. Padma Shri 2022 Lalita Vakil, who hails from Chamba, has been working for the promotion of Chamba Rumal for almost 50 years and the award was a recognition not only for her but also for the traditional. Syllabus for The Posts of Secretary