In this blog, we will tell you about the History of District Bilaspur Himachal Pradesh. On December 10, 1961, on the occasion of the inauguration of the Bhakra Dam, the first Prime Minister of the country, the late Jawaharlal Nehru, while giving a speech, called this dam the modern temple of India. He had said that this will bring prosperity to our country. Nehru’s dream came true, the construction of Bhakra Dam actually brought prosperity to the country. Large-scale fish production started in Gobindsagar lake. The fortunes of fishermen have changed but there is another side to this picture as well.

Historical Bilaspur had to be submerged in the lake for the construction of the Bhakra Dam. Destruction also has to be mixed for development. That is the destruction of the extinction of culture. The glorious culture of Bilaspur is also immersed in the Gobind Sagar Lake. It all came to an end on the same day when the old city of Bilaspur was submerged in the Gobind Sagar lake. People above sixty years can still be heard reliving old memories.

In fact, the submergence of a city in a huge reservoir is not just the submergence of mud, mud, brick, and stone houses. The sinking of that city was the sinking of a culture. Not only Rang Mahal and the new palace of Kahlur Riyasat were drowned in the Gobindsagar lake, but also the old palace, Shikhar style 99 temples, school college, Panjrukhi Nalayan Nau, Dandayuri, Bandalia, Gohar Bazar, Guruthan in the soil of Sikhs, Gopal Ji. The temple and court premises were also submerged. For the first time on August 9, 1961, when the water level of Bhakra Dam increased, the city of Bilaspur went on drowning.

The old Bilaspur city was submerged in the Gobind Sagar lake in August 1961. The city was the capital of the princely state of Kahlur. Dalip Chand, a great illustrious king of Kahlur princely state, established this city as his capital. He built his palaces at Dholra and built a town downstream. Writers and poets have made a huge contribution to the literary world with their pen regarding that city immersed in the lake.

Former MLA of Bilaspur and poet Late Pandit Dinanath has described this pain in one of his Najam in this way, ‘ Sutlej’s water increased. The place where Vyasa struck the sting of knowledge and then Shukadeva established the seat of meditation, that land has now been handed over to you, O country. He writes another poem on the evening of August 9, ‘बढ़ने लगी बांध की शोखियां, वह सतलुज मेरा हड़बड़ाने लग, मचा गुल शहर में तू चल भाग चल, वह आने लगा पानी आने लगा’। 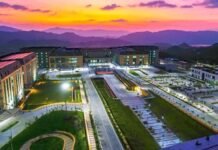 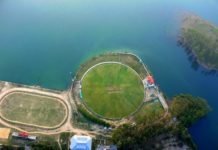