Malana village is an ancient village situated in the northeast of Kullu valley. It is a secluded village isolated from the world. Located at an altitude of 9,938 feet above sea level, this village of Himachal Pradesh is a magical and green village. It is also called the village of Taboos. Its distance from Kullu is about 23 km. The easiest way to reach Malana is to hire a taxi from Jari as no public bus still plies to Malana village, which is 23 km away. This village is connected by three mountain passes, which are Dev Tiba and Chandrakhani peaks. There are many interesting things about Malana village which are a great pleasure to listen to. In today’s era, such things are rarely heard.

We tell you some things about the history of Malana village, the people here still follow the law made by them. Malana village is considered to be one of the oldest democracies in the world. People here believe in Shiva and Jambul Devta. The Malani people believe that they are descendants of Alexander. Malana is also known as the village of Taboos. Malana is considered to be one of the first democracies in the world. According to tradition, the residents of Malana believe that they are descendants of Aryans, and that they gained their independence only during Mughal rule when Emperor Akbar came to the village to seek treatment for his illness and was successfully cured. Pleased with the people of the village, he issued a decree that all residents of the valley would never be required to pay taxes.

The unwavering faith of the villagers rests on their faith in their powerful deity Jambalu Devta. The entire administration of the village is controlled through the Gram Sabha. There are eleven members in this council and their decision is the final decision. This village still follows its own law and does not allow outsiders to tamper with its law, no outside authority is ever needed. Malana is called the Athens of the Himalayas, and the deity Jamalu is known as sage Jamadagni. The people here have always been kind to tourists, having made sure in advance not to touch the walls or the belongings of the natives. As strange as it may sound, they still do not eat food cooked by non-natives. 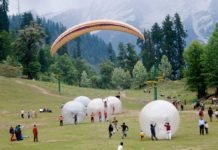