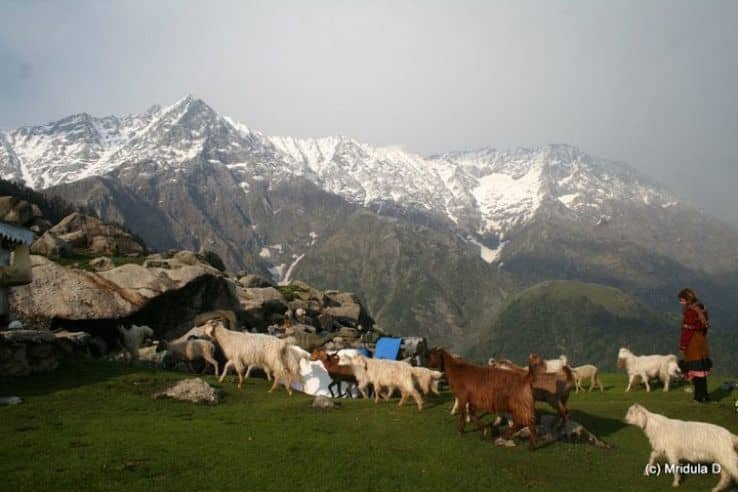 The Dhauladhar range (lit. The White Range) is part of a lesser Himalayan chain of mountains. It rises from the Indian plains to the north of Kangra and Mandi. Dharamsala, the headquarters of the Kangra district, lies on its southern spur above the Kangra Valley, which divides it from Chamba
The highest peak in the range is the Hanuman Ji Ka Tiba, or ‘White Mountain’, about 5,639 m or 18,500 ft high. There are several peaks that are close to the 5,180 m (17,000 ft) Dhauladhar Range.

Himachal Pradesh has all the major Himalayan ranges represented in it. The Greater Himalayas which begin near Ladakh and run all the way to Mount Everest and Kangchenjunga in Sikkim, pass through Himachal Pradesh.

The Pir Panjal Range starting from near Patni Top in Jammu and Kashmir all the way to Garhwal passes through Himachal Pradesh. Finally, there is the Dhauladhar range, also known as the Outer Himalayas or Lesser Himalayas. They begin near Dalhousie at the northwest end of Himachal Pradesh and pass through the state to the vicinity of the bank of the Beas River in the Kulu district of Himachal Pradesh. While they end near Badrinath in Garhwal, they lie almost entirely in Himachal Pradesh. They are distinctive in their typical dark granite rocky formations with a remarkably steep rise culminating in sharp streaks of snow and ice at the top of their crested peaks. This distinctive profile is best seen from the Kangra Valley where they seem to shoot up almost vertically.

The elevation of the Dhauladhars ranges widely from 3,500 m to nearly 6,000 m. From the banks of the Beas river in Kulu, the range curves towards the town of Mandi, Himachal Pradesh, India. Then, running north, it passes through Barabhangal, joins the Pir Panjal range, and moves into Chamba, Himachal Pradesh.