Malana is an ancient village to the north-east of Kullu Valley. This solitary village in the Malana Nala, a side valley of the Parvati Valley, is isolated from the rest of the world. At an altitude of 9,938 feet above sea level lies the village of Malana also known as the village of Taboos. This village in the state of Himachal Pradesh is a magical green-rimmed village that overlooks the Deo Tiba and Chandrakhani Peaks. Malana village is connected to Kulu by three mountain passes. Once in the state of Himachal Pradesh, it can be reached from Parvati valley across the Rashol Pass and Chanderkhani pass. The easiest way to reach Malana is from Jari by hiring a taxi since no public buses ply to the village of Malana, which is 23 km away. The village of Malana is considered as one of the oldest democracies in the world. It is also known by the drug mafia for its hash which is extracted from the Cannabis plant and travels the world which is also the main source of income for the Malanese.

The Malanese people believe that they are descendants of Alexander and their rituals involving purity and pollution are as stringent as their faith. Unlike the rest of India, the village of Malana has its own religious beliefs. Apart from their undying faith in Shiva, they believe in their Devta, Jamlu Rishi. It is said that the sage from the Puranas once inhabited the land and laid the foundation of the democracy, which still works as a fully functional parliamentary system.

The social structure of Malana, in fact, rests on villagers’ unshaken faith in their powerful deity, Jamblu Devta. The entire administration of the village is controlled by him through a village council. This council has eleven members and they are believed as delegates of Jamblu who govern the village in his name. His decision is ultimate in any dispute and any outsider authority is never required. Thus Malana has been named the Athens of Himalayas. Jamlu is invoked through a villager serving as an oracle.[1] deity Jamalu is known as Rishi Jamdagni. This primitive land shadowed by the majestic peaks of Chandrakhani and Deotibba has always been kind to tourists, fiercely and silently guarding its own culture. When in Malana, be sure not to touch the walls or belongings of the natives unless you want a fine imposed. Crazy as that may sound, they don’t even eat food cooked by a non-native.

Malana also is known as the village of Taboos

Malana is considered to be one of the first democracies in the world. According to tradition, the residents of Malana are the descendant of Aryans, and they acquired their independence during the Mughal reign when Emperor Akbar walked to the village in order to cure an ailment that he was afflicted with; after having been successfully cured he put out an edict stating that all the inhabitants of the valley would never be required to pay tax. An alternative tradition suggests that Malana was founded by remnants of Alexander the Great’s Army.

Malana’s crème has a notorious legacy in international stoner culture. It has won the Best Hashish title twice, in 1994 and 1996, at High Times magazine’s Cannabis Cup. Marijuanaphiles the world over have since made this region a popular weed-tourist destination, branded in travel and ganja-hunting literature as the exotic and alluring “Malana and the Magic Valley.” It was inevitable that the farmers would start to realize the global potential of their plants—and that the cops would take any and all measures to prevent these rural agriculturalists from increasing production. The most effective tool in the authorities’ arsenal is satellite technology, but the farmers have found a workaround. 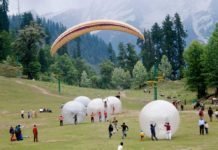